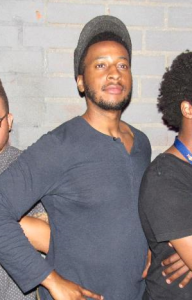 1) Are you still a comic?
– Hmm let me check real quick…(reflects while looking out of a window, searching for answers) …yep, still a comic.
2) How has this year been for you professionally?
– This past year has been tremendous. I took first place in the inaugural “Comedy Circuits” Show at the Comedy Store earlier this year and I’ve written for several digital content companies and produced and premiered my newest original series “BOUGIE” in Hollywood.
3) Has your personal life changed in any way that has affected your perspective or ability to perform? If so, how?
– Absolutely, I think that I used to beat myself up if I wasn’t doing stand up every night of the week, and now not so much. I am a comedian, and that is an all encompassing concept. That means I strive to be and produce funny and thought provoking content across multiple platforms, including, not only the stage, but in acting roles, and in writing content. While achieving stage time is important, it’s definitely not the only thing I’m focused on.
4) Has your performance style or joke topics changed? If so, how?
– While the topics I talk about on stage will always be subversive and hopefully different and thought provoking, I now tend to be less stringent and rehearsed on stage. I go more with the flow of the crowd and I’m learning how to parlay riffs and crowd work into the bits that I’ve rehearsed. I think that it is very important in order to get the audience on your side.
5) Have you learned any new tricks of the trade? If so, name one.
– Aside from what I’ve mentioned above, for me it’s all about being as concise as possible when delivering your bits. Don’t to be wordy or rapidly “vomit” out ideas and jokes because your audience might get lost and think that you’re doing too much. Know your talking points but don’t be a prisoner to them, learn how to adapt on the fly.
6) What’s been a highlight of your last year?
-The highlights of my year include winning the Comedy Circuits competition, the premiere screening of my original series, “BOUGIE” in Hollywood and successfully landing a writing gig with All Def Digital. Also, watching “The Makings of a Stand Up Comedian” on Amazon Prime and spending two dollars to watch myself… and everyone else too, of course…
7) What’s been a lowlight of your last year?
–  While it’s cool and neat to finally be compensated for the ideas in my head, the mystique of it all eventually revealed itself to be a “job” at the end of the day. Despite that feeling, still feel blessed to be compensated to do something I enjoy. I know right…Champagne problems.  Of course lowlights can also include the normal ups and downs that come with being a part of this industry. Things can be tough but it’s important to build poise and resolve.
8) What’s the biggest lesson you’ve learned in the last year?
– Have a plan but be free and open to promising experiences and opportunities. At the end of the day, no matter what/where the opportunity is, you have to do the work and push yourself to make sure it is your complete and best effort.
9) Is there any new advice you’d like to share with aspiring comics?
– Make your career what you want it to be. Be multifaceted because that will be the only way that you get noticed in this town. Do work on stage, on camera, write, produce, direct and network all throughout. But keep working no matter what and stay sharp!
10) Do you still want to “make it?”
– Wait a second, I haven’t already?
Don’t forget to follow Aaron on twitter at @aaronlburleson, and download “The Makings of a Stand-Up Comedian” on Amazon Instant Video here or purchase it here.